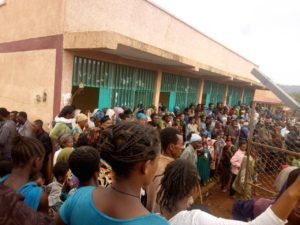 At least 2000 ethnic Amharas were displaced from Amaro district in southern Ethiopia by what the victims said were a coordinated attack by people who consider themselves indigenous to the area.

Information ESAT received from the area also show that 21 people were kidnapped and their whereabouts is not yet known. Two people were killed on Sunday while several others were injured.

A source told ESAT that Ajire Nigussie was gunned down on Sunday. His neighbor, Woldeyes Bayo was stoned to death while on his way back from the burial of Nigussie.

About 800 goats and cattle were also looted, according to the source.

The recent displacement in Amaro came on top of the displacement of at least 800,000 ethnic Gedeos from the nearby Guji zone.

In 2018 alone, UN agencies say more than a million people were internally displaced as a result of ethnic violence, the highest number of IDPs anywhere in the world in that year.

The UN also says close to 3 million people remain displaced in Ethiopia mainly as a result of ethnic violence in the southern part of the country.