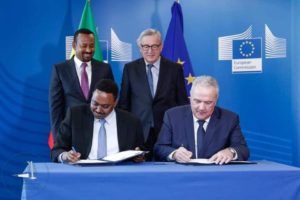 The European Union has agreed to grant 130 million Euros to Ethiopia to promote sustainable economic growth and job creation.

European Commission said in a Press release that the President of the European Commission, Jean-Claude Juncker met with the Prime Minister of Ethiopia Abiy Ahmed, who is on a working tour in Europe, to discuss EU support to Ethiopia’s reform process and agreed to an additional €130 million to support job creation.

“The partnership between Ethiopia and the EU is particularly strong and the meeting with Prime Minister Abiy today allowed us to exchange on how to further deepen it. The EU supports the ambitious reform agenda in Ethiopia and is committed to step up its support to the country, ” President Juncker said on the occasion.

The grant was signed by EU Commissioner for International Cooperation and Development, Neven Mimica and Ethiopian Minister of Foreign Affairs Dr. Workneh Gebeyehu to support three new programmes to promote sustainable economic growth and job creation in the country for a total amount of €130 million.

Of the total amount granted, €50 million will go to support job creation, €35 million for sustainable energy and €45 million for the establishment of agro-industrial parks in Ethiopia, according to the press release by the European Commission.