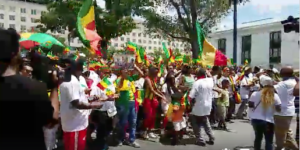 Ethiopians in the Washington metropolitan area have come out in huge numbers to express solidarity with their Prime Minister back home, who is garnering big support from the people both at home and abroad for his populist ideas and his resolve to introduce political and economic reforms.

The Ethiopians, who gathered today at the US State Department, also denounced efforts by some elements within the Ethiopian government who wish to create hurdles on the way of Abiy Ahmed’s reform endeavors.

The demonstrators denounced Saturdays grenade attack in Addis Ababa, an assassination attempt on the life of Dr. Ahmed, that claimed the lives of two people and wounded over 150.

The Ethiopians called on the United States to stand with the people of Ethiopia and their leader, who wish to do away with nearly three decades of dictatorship that brought ethnic division and animosity; and in their struggle to bring peace, reconciliation as well as progress in economic fields. They also demand the US Congress to pass S. Res 168, a resolution supporting human rights and inclusive governance in Ethiopia.

Representatives of the Eritrean community have also taken part in the demonstration to show solidarity with their Ethiopian kins.