Ethiopia to lift state of emergency

The cabinet of Ethiopia’s Prime Minister, also known as the Council of Ministers, has announced today that a state of emergency imposed in February would be lifted. 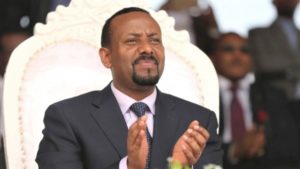 The news comes in the form of a tweet by Fitsum Arega, the Chief of Staff of the Prime Minister, who wrote that the Council, after assessing the security situation in the country, has “noted that law & order has been restored.”

“The Council of Ministers in its today’s regular meeting reviewed the security situation of the country. It noted that law & order has been restored. It has approved a draft law that lifts the State of Emergency. The draft will be sent to Parliament for its consideration,” Arega tweeted.

Ethiopia imposed a state of emergency in February, the second martial law in two years, after a nationwide and deady anti government protest in which security forces killed hundreds of protesters and tens of thousand detained.

The current state of emergency was declared on February 16, a day after the former Prime Minister, Hailemariam Desalegn abruptly resigned and way before the new Prime Minister, Abiy Ahmed, was appointed – putting into question the legitimacy of the decree.

Abiy Ahmed, appointed on April 2, 2018, is viewed as a change agent by many Ethiopians. Under his watch, thousands of political prisoners have been freed. Ahmed’s call for reconciliation and unity, in a country where ethically aligned political tension is high, resonate among the majority seeking change in the country. But his critics say he belongs to a regime that put the country in a political quagmire in the first place.

Ethiopia’s parliament is expected to act on the draft law sent to it by the Council of Ministers, officially lifting the martial law.