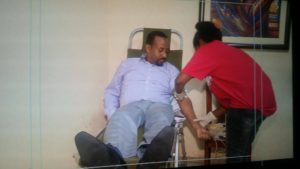 Twenty-six people suspected of carrying out a bomb attack at a rally in Ethiopia’s capital Addis Ababa on Saturday, including police and security officers, have been arraigned before a federal court of first instance in the capital.

Of those brought before the court today were 17 police and security officers whom prosecutors say have demonstrated security lapse in protecting the Prime Minister, Abiy Ahmed and the public from harm. The deputy commissioner of the capital’s police, Girma Kassa, is one of the officials arraigned in today’s session. Nine of them were accused of planning and carrying out the attack.

Police requested additional 14 days to complete its investigations, which was granted by the court.

A request for bail by the defendants has been denied by the court.

The attack claimed the lives of two people and injured 156. Three people still remain in critical condition, but over 100 people have received treatment and sent home, according to latest figures released by the country’s health ministry.

Meanwhile, the Prime Minister has donated blood today to victims of the attack.