UPDATE: The FBI has already begun its investigations into the bomb attack, as per a press statement by the Federal Police Commission, Zeinu Jemal. 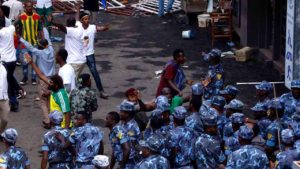 The United States Federal Bureau of Investigation (FBI) will investigate the deadly bomb attack at a rally held in the capital on Saturday in support of the new Ethiopian Prime Minister, according to US officials visiting the country.

The report by ruling party affiliate Fana Broadcasting Corporation said Under Secretary of Commerce, Gilbert Kaplan, who is visiting the country told its Foreign Minister, Workneh Gebeyehu that the US will send FBI investigators to examine the blast that claimed the lives of two people and injured 156.

Three people still remain in critical condition, but over 100 people have received treatment and sent home, according to latest figures released by the country’s health ministry.

A person in a police uniform tried to throw a bomb in the direction of a stage where the Prime Minister, Abiy Ahmed, just finished addressing a roaring crowd. But a police officer and onlookers intervened and the bomb went off, according to witnesses and organizers who spoke to several media outlets.

Organizers and witnesses say the attack was apparently an assassination attempt on the life of the Prime Minister.

“The target was the prime minister because the suspect was aiming to throw the grenade by the right side of the stage where he was sitting,” Seyoum Teshome, one of the organizers said in an interview with reporters.

A record crowd had gathered at Meskel Square, the capital’s central square, to show support for the young Prime Minister, considered a reformist in an otherwise rigid ruling party of the EPRDF that reigned with iron fist for 27 years.

Ahmed made calls to all oppositions for dialogue, announced plans that major economic sectors would be partially privatized and extended olive branch to neighboring Eritrea to resolve long-standing border disputes. He also released political prisoners and offered to work together. Those measures had resonated with the majority of Ethiopians who came out on Saturday and Sunday in hundreds of thousands, if not in millions, in towns across the nation to show their solidarity with the Prime Minister.