A delegate from the United States was told by TPLF officials that the state of emergency was necessary to “prevent a takeover of power by the military,” according to ESAT’s diplomatic sources. 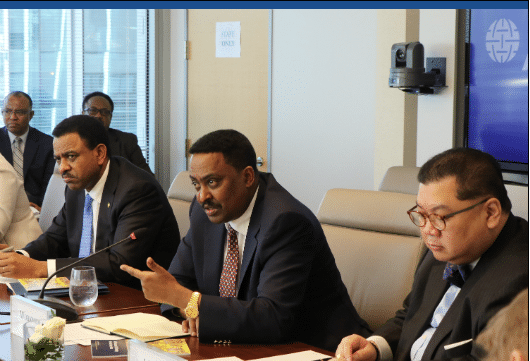 Workneh Gebeyehu at the Atlantic Council, Washington, DC on February 15, 2018

A diplomatic mission led by Foreign Minister Workneh Gebeyehu was in Washington, DC few days before the declaration of the martial law on February 16, 2018 to meet officials at the U.S Department of State, who told the Ethiopian delegate that the state of emergency was a bad idea and advised against decreeing the law.

The martial law was declared before Gebyehu returned back to Addis Ababa, but he requested to come back to the U.S. “to explain why the decree was necessary.” That request was turned down by State Department officials who told the Foreign Minister that he could meet with a delegation of the U.S. that was already on tour in Africa.

According to ESAT sources, as soon as meeting the U.S. delegates, the Foreign Minister arranged a meeting between them and leading members of the TPLF namely Sebehat Nega, Seyoum Mesfin and Abay Tsehaye. The trio told the delegates from the U.S. that the state of emergency decree was “necessary to prevent intervention and takeover of power by the military removing the civilian government.” They also told the U.S. delegates that they should not be criticized for declaring the state of emergency.

The TPLF side also told the U.S. delegates that the martial law was declared “in consultation with the military.’”

The U.S. delegates did not find the argument convincing and the Embassy in Addis Ababa came up with statement that “strongly disagree” with the declaration of the state of emergency.

“We strongly disagree with the Ethiopian government’s decision to impose a state of emergency that includes restrictions on fundamental rights such as assembly and expression,” said a statement from the Embassy issued on February 17, a day after the decree.

Critics say the argument by the three TPLF officials, who together with a handful of others run the country with iron fist, does not hold water. Critics also question why the trio were the ones speaking to the U.S. delegate while those in official position such as the Prime Minister and his deputy as well as the Foreign Minister himself were supposed to represent the Ethiopian side.