Towns in the restive Oromo region of Ethiopia has continued to defy a state of emergency declared in mid-February as a three-day “stay-at-home” strike began on Monday. The new wave of strikes in some parts the Oromo region had actually began last Friday when Parliament ratified the decree.

The vote tally at the Parliament on the martial law was quickly challenged as the number of those who voted in favor of passing the decree, announced by the House Speaker, did not add up to meet the two-third majority to pass a law. 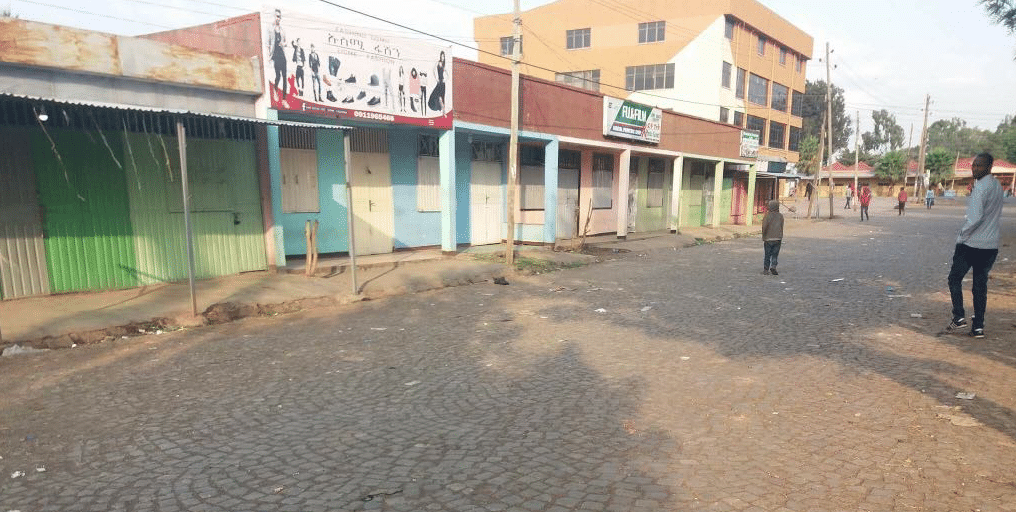 Shops remain closed on Monday (o3/05/18) in Waliso town, 69 miles south west of the capital Addis Ababa. Photo sent to ESAT by a resident in the town.

Security forces shot and killed three people today. Two were killed in Jimma, according to Oromo activists, while the third was killed in West Hararghe, in a locality called Chiro, a resident confirmed to ESAT.

Eerie silence envelopes towns and cities in Western Ethiopia with businesses and transportations, as well as government offices closed, some since Sunday afternoon.

Several media outlets also say transportations to the capital has been disrupted as surrounding towns and localities, which are mainly Oromo administrations, joined the strike. There was no public transportation going into the capital on Monday and some people had to take the long walk to the capital city, according to those who spoke to the BBC Amharic Service in Addis Ababa.

The weekend also saw the deadliest in the Oromo region since the declaration of the martial law that was ratified by a rubber stamp Parliament in the capital Addis Ababa despite controversy over whether the House of People’s Representatives had given the two-third majority vote to authorize the state of emergency.

Six people were killed on Friday on Ambo and Guder, about 80 miles west of the capital Addis Ababa. Tow of the casualties were a father and son who were shot by the Agazi soldiers of the regime. The father had died instantly and the son is in critical condition.

The Voice of America Amharic service spoke to a neighbor who said the father, Digafe Dandena, was sound asleep when the soldiers break into his house. The neighbor told the VOA that the soldiers asked Dandena to come out and clear the rocks and tree logs blocking the road outside.

“He just said ‘I am an old man, leave me alone,’ at which point one of the soldiers shot him at a close range with a sniper rifle. They tore his head apart and we had to bury him on the same day due to the excessive and non-stop bleeding,” the neighbor, who wanted to remain anonymous told the VOA.

“The son, Terefe, was trying to intervene when they shot him. He is critically wounded and we fear for his life,” he added. Terefe was shot in the head, abdomen and shoulder.

Three people were shot and killed on Friday by Agazi soldiers in Ambo town, about sixty miles outside the capital Addis Ababa. A twelve year old was shot and killed in Mendi town. One person was killed in Kelem Wollega while another sustained serious injuries.

The Agazi force is exclusively made up of ethnic Tigrayans, who also form the ruling Tigray People’s Liberation Front (TPLF), which also controls the military.

Hundreds were killed and tens of thousands detained since anti TPLF protest began in late 2015 with people in the Oromo and Amhara region, the two majority ethnic groups, demanding an end to dictatorship by minority Tigrayans.

The killing today and the weekend killings came few days ahead of a visit by the U.S. State Secretary, Rex Tillerson, who will also be travelling to few other African countries. The regime in Ethiopia, a strategic ally of the United States against Islamic extremism in the Horn of Africa, enjoys financial aid and military cooperation. Talks between Tillerson and Ethiopian officials is expected to focus on the political deadlock in the country that has resulted from demand by the Oromo and Amhara people as well as their political leaders within the coalition for a fair share of political and economic power that has been solely controlled by the Tigrayan oligarchy.