TPLF army generals as well security and intelligence personnel had visited houses of MPs from door to door, threatening members of Ethiopia’s rubber stamp parliament not to vote against the state of emergency declared on February 16, 2018. 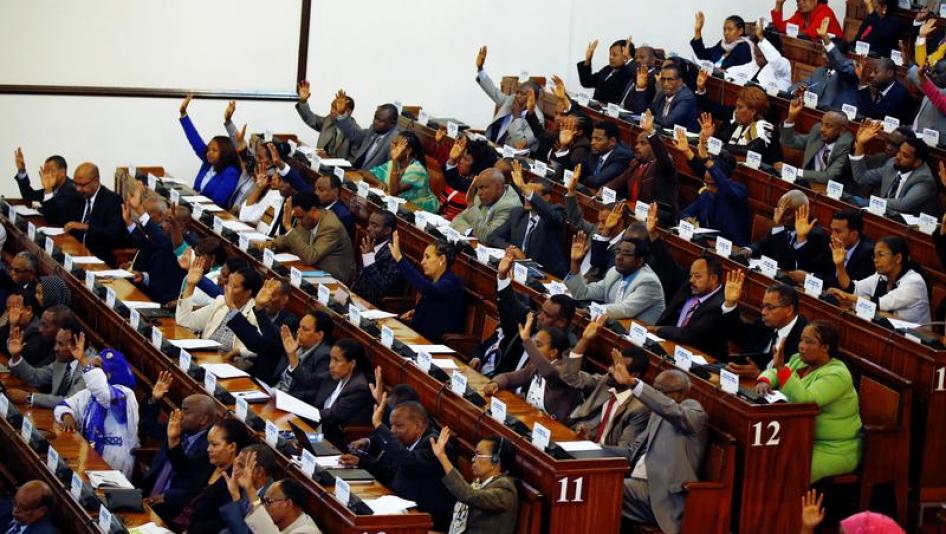 Members of Ethiopia’s House of People’s Representatives, who are in recess, are holding an emergency session this coming Friday and are expected to vote on the state of emergency. The martial law was declared for the second time in two years as the country plunges further into deadly violence, with the people demanding the removal of the TPLF dictatorship and formation of a democratic process to effect change.

Some MPs who contacted ESAT said TPLF army generals and members of the intelligence and security made a visit to their residence and threatened that if they do not vote for the passage of the decree, they “would be held responsible for the crisis in the country.”

The majority of members of Ethiopia’s Parliament reside in the same apartment building on Bole road, where the generals and intelligence personnel were said to have gone to threaten the MPs against voting no to the martial law.

Members representing the Oromo People’s Democratic Organization (OPDO) were specifically targeted by the generals and intelligence officers. The OPDO is under extreme pressure from its constituents and Oromo activists that urge the party not to vote in favor of the decree. Leaders of the OPDO, credited by many for pushing for a change of the status quo within the coalition EPRDF, have long objected the idea of ruling the country with a martial decree. The other members of the coalition, the Amhara National Democratic Movement (ANDM) and the South Ethiopian People’s Democratic Movement (SEPDM) have also been targeted by the generals in the campaign. The two parties are not usually known to be a challenge to the Tigray People’s Liberation Front (TPLF), the dominant power within the coalition, which also controls the military, security and even the economy of the country.

Critics see ANDM and SEPDM, as two “yes” parties functioning under the direct orders from the TPLF and have no real say in the coalition as well as in the quasi federal arrangement. When the SEPDM held a meeting to elect its chairman two days ago, sources told ESAT that the TPLF has instructed the SEPDM to elected Siraj Fegessa, the Ministry of Defense as its chairman. In a surprise twist of events, Siraj Fegessa was replaced by Shiferaw Shigute for no apparent reason, again by orders of TPLF officials, according to the sources.

The political drama resulted in the announcement, on the same day, of two new chairpersons for the SEPDM by media controlled by the regime.

The chairpersons of the four parties forming the coalition will be presented as candidates for the position of the prime minister, according to the EPRDF tradition, and the winner will replace Hailemariam Desalegn, who resigned on February 15 amid internal pressure within the coalition and pressure from the public that see him as just a placeholder in the TPLF controlled executive branch.

While the TPLF, through its generals and security apparatus, is blackmailing MPs to vote for the passage of the six-month martial decree, constituents and activists are also campaigning on social media and making phone calls to MPs urging them to vote no.

A ten month state of emergency was declared in October 2016 after deadly anti-regime protests in which security forces shot an killed at least 2000 demonstrators. The regime also imprisoned tens of thousands, triggering a call by the international community for an independent investigation into extrajudicial killings and human rights violations.

The UN High Commissioner for Human Rights was repeatedly denied access to to the country to investigate extrajudicial killings and human rights violations.

Last month, members of the U.S. Congress, spearheaded by the majority leader Kevin McCarthy and Representatives Mike Coffman and Chris Smith gave an ultimatum for the Ethiopian regime to announce its willingness that it would allow UN rapporteurs to investigate the human rights violations. Failing to do so, the congressmen warned, House Resolution 128 would be put to the House floor for a vote. The resolution among others hold those responsible for perpetrating the extrajudicial killings and those involved in rights violations, including TPLF officials.