One of the thirteen people shot and killed last Saturday by TPLF security forces on Epiphany day religious festival in Woldia, a town on a major transportation route in Northern Ethiopia, was shot five times. 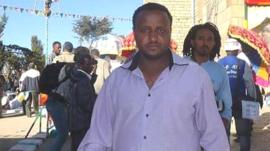 According to accounts of his brother who spoke to the BBC Amharic service in Addis Ababa, he found the body of his brother, Gebremaskal Getachew at the town’s hospital riddled by sniper fire.

Kidane says he counted five bullet wounds on the body of his brother who, at the time of the shooting, was away from the celebration and the crowd of youth staging anti-TPLF protests. He said his brother was shot on his neck, chest, abdomen and groin.

Gebremaskal was married and has a 5 year-old daughter. He was a known businessman in the town doing steel work and was constructing a building to expand his business.

“I called his cell several times as soon as i heard the shootings began. He did not answer. I knew something was not right so i went to the local hospital,” Kidane told the BBC Amharic.

“I couldn’t believe what i saw. He was the breadwinner and he loves his family. They killed not only my brother, they killed the entire family,” Kidane says.

“I don’t know why they killed my brother.”

Kidane says even the burial of his brother on Sunday was disrupted by security forces. He said they shot live bullets and gas canisters to disperse people who came for the burial.

Kidane also said they lost a younger brother to illness few weeks ago and the killing of Gebremaskal rubbed salt into the family’s wound.

(Click below for more on the Epiphany killings in Woldia)

Ethiopia: Three killed for lowering flag at half-mast to mourn death of compatriots