Ethiopia: Three killed for lowering flag at half-mast to mourn death of compatriots

TPLF security forces shot and killed three people in Alem Tena, East Shewa today while holding a sit in protest at a flagpole to mourn the death of protesters in Woldia and Moyale in the weekend. 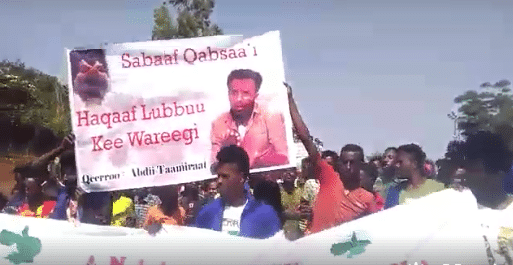 The deceased had lowered the flag to a half-mast to mourn the death of protesters this weekend. Security forces put the flag back to full-mast at which point the protesters held a sit in protest. According to information obtained from Oromo activists, the forces shot and killed the three people execution style.

The killing has sparked angry protests by residents in Meki and other nearby towns.

The local UN office in Ethiopia also said in an alert to its staff that violent protests have been reported in Alem Tena. The office also said the main highway between Mojo and Awassa has been blocked by security forces.

Protests were also held in Mendi, Wollega at a burial of a young man shot and killed yesterday by security forces.