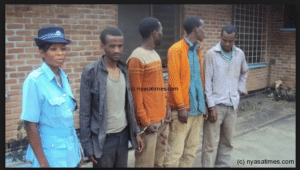 Malawi’s Department of Immigration said it has apprehended 66 Ethiopians for entering the country illegally, according to a report by the Nyasa Times. But most Ethiopians flee their country because of widespread political persecution.

The report said the Ethiopian immigrants were nabbed on Tuesday after a tip by some residents who spotted suspicious people in the mountains.

“We rushed to the mountains where we found the 66 Ethiopians hiding and nabbed them,” he said adding that they will answer charges of illegal entry contrary to Section 21 (1) of the Malawi Immigration Act.

The immigrants, who are all male, are on a remand at Mzuzu Prison waiting to appear in court soon, the Nyasa Times report said.

Each year, thousands of Ethiopians flee to Europe and South Africa to escape political persecution and in search of better economic opportunities.

Despite talk of double digit economic development, the regime in Ethiopia is unable and unwilling to provide citizens with decent living conditions.