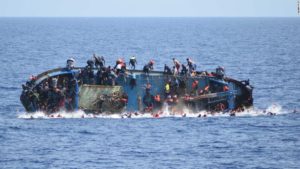 Amnesty International said today that European governments are knowingly complicit in the torture and abuse of tens of thousands of refugees and migrants detained by Libyan immigration authorities in appalling conditions in Libya.

The rights watchdog published an expose today in the wake of global outrage over the sale of migrants in Libya that was first exposed in a CNN investigative report.

The report, ‘Libya’s dark web of collusion’ details how European governments are actively supporting a sophisticated system of abuse and exploitation of refugees and migrants by the Libyan Coast Guard, detention authorities and smugglers in order to prevent people from crossing the Mediterranean.

“European governments have not just been fully aware of these abuses they are complicit in them,” the report said and added that “hundreds of thousands of refugees and migrants trapped in Libya are at the mercy of Libyan authorities, militias, armed groups and smugglers often working seamlessly together for financial gain.”

It said since late 2016, EU Member States – particularly Italy – have implemented a series of measures aimed at closing off the migratory route through Libya and across the central Mediterranean, with little care for the consequences for those trapped within Libya’s lawless borders.

The report said that European governments have committed to providing technical support and assistance to the Libyan Department for Combating Illegal Migration (DCIM), which runs the detention centres where refugees and migrants are arbitrarily and indefinitely held and routinely exposed to serious human rights violations including torture.

The Europeans have also enabled the Libyan Coast Guard to intercept people at sea, by providing them with training, equipment, including boats, and technical and other assistance, according to the report.

“Libyan Coast Guard officials are known to operate in collusion with smuggling networks and have used threats and violence against refugees and migrants on board boats in distress. Footage, pictures and documents reviewed by Amnesty International indicate that a boat donated by Italy in April 2017, the Ras Jadir, was used by the Libyan Coast Guard during a horrific incident on 6 November 2017, where their reckless actions contributed to the drowning of up to 50 people.”

The EU governments have also struck deals with Libyan local authorities and the leaders of tribes and armed groups – to encourage them to stop the smuggling of people and to increase border controls in the south of the country, it said.

Amnesty International said so far in 2017, 19,452 people have been intercepted by the Libyan Coast Guard, taken back to Libya and immediately transferred to detention centres where torture is rife.