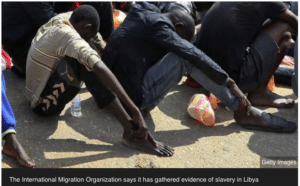 A leaked document obtained by the Addis Standard says the European Union and the Ethiopian regime are close to signing an agreement to return Ethiopians in Europe who have not been granted refugee status.

The document says the Ethiopians will be returned voluntarily or otherwise.

Meanwhile, the African Union says it now plans to repatriate 20,000 African migrants in detention centres in government-controlled parts of Libya in the next six weeks – an increase on previous plans.

According to the BBC report, African governments are under pressure to act after TV reports showed sub-Saharan Africans being sold as slaves in the country.

The report said the AU said it was working to organise consular services for stranded migrants and landing rights for planes to fly them out of Libya.

Some countries have already begun flying their citizens back home.