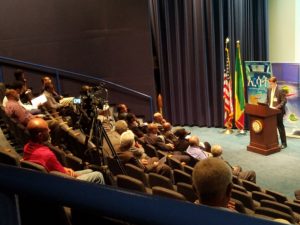 A two day conference in Washington, DC that deliberated on building democratic institutions in Ethiopia demanded the regime to desist from hatching up conflict between ethnic groups in the country.

The conference that was held on Saturday and Sunday with the title “Ethiopia on a dangerous course” also deliberated on the critical issues in the country and called on all Ethiopians to “to resist the government’s ill-intentioned scheme of pitting one ethnic group against the other, stand shoulder to shoulder, and save their communities and country from the national calamity that is gradually unfolding.”

Speaking at the conference a representative of the Oromo Democratic Front, Dr. Mesfin Abdi called on all Ethiopians to unite against the divisive policies of the regime and work together to build a democratic Ethiopia.

Representatives of various political parties, civic organizations and activists took part at the conference and exchanged views on ways of defusing ethnic tensions instigated by the regime.

The conference also called upon the international community pressure the regime that is taking “the country on a dangerous path of destruction,” and said “financial assistance and military aid should only help promote the unity of the country, peace, development and encourage the rule of law in Ethiopia.”

The conference was organized by Vision Ethiopia in collaboration with ESAT.