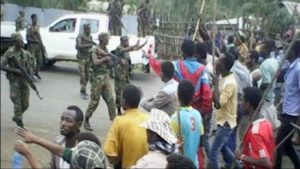 The Human Rights Watch says Ethiopian authorities should do more to bring to justice former officials and security personnel who were responsible for the death of hundreds of people across the country.

Continuing its series of reports on Ethiopia and reviewing the one year performance of the government of Abiy Ahmed, the rights group said the government has failed to do meaningful investigations into most of the crimes committed by former officials and members of the security forces.

The HRW acknowledges that Abiy’s first few months “saw many positive human rights reforms and a renewed sense of optimism following several years of protests and instability, along with decades of repressive authoritarian rule. Thousands of political prisoners have been released, a peace agreement has been signed with neighboring Eritrea, and Abiy has pledged to reform repressive laws.”

It however said “in the months that followed, growing tensions and conflicts, largely along ethnic lines, have resulted in significant displacement and a breakdown in law and order across much of the country, threatening progress on key reforms.”

The rights watchdog recalled war crimes committed by Ethiopian security forces and the Ogaden National Liberation Front (ONLF) in 2007 and 2008, and said the government has “failed to conduct any meaningful investigations into the crimes.”

It also recalled that security forces killed over 1,000 people and detained tens of thousands between 2015 and early 2018 in anti government protests in the Oromo region of the country as well as the death of scores of people at the 2016 Irreecha Festival. It said these crimes have yet to be investigated. The HRW also urges the massacre of about 400 Anuak civilians in the town of Gambella in December 2003 should also be investigated and that perpetrators be brought to justice.

“There are no known cases of abusive security officials being held to account for the crimes they committed. Ethiopia also strongly opposed international investigations, asserting that it can carry out such investigations on its own.”

The rights group recommends that the country needs “comprehensive security sector reforms to ensure that security forces respect people’s rights and that there is an appropriate vetting process to ensure that officials responsible for serious human rights violations are removed.”