OLF has no military in Amhara region, says spokesperson 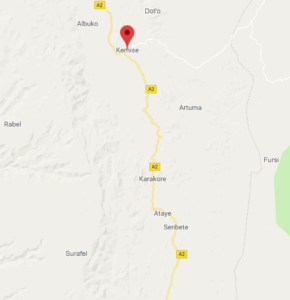 A spokesperson for the Oromo Liberation Front (OLF), whose army was accused of recent killings in the Amhara region said the Front has no military presence in the region.

Spokesperson for the Front, Tolera Adeba told Deutsche Welle Amharic that the OLF has no military presence in Amhara towns where local authorities accused that soldiers of the Front killed more than a dozen people in Majete, Ataye and Kemise over the weekend.

Head of press secretariat at the Prime Minister’s Office, Nigussu Tilahun meanwhile told ESAT that calm has been restored and federal and regional forces were in control of the towns affected by the attack.

“Regional and federal forces have been instructed to take measures necessary to protect peace and security in the towns,” Nigussu Tilahun said in an interview with ESAT.

Head of security for North Shewa administration, Kassahun Embiale however told the regional mass media agency on Sunday that soldiers of the OLF were responsible for the deadly attack, looting and kidnapping of women and children.

“Our work focuses on just politics. We have no military that is under our command anywhere in the Amhara region,” said the OLF spokesperson.