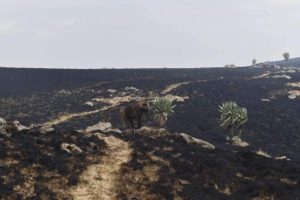 A fire that began on Monday at the Semien Mountains National Park in Northern Ethiopia has gutted down 342.9 hectares of grassland.

Director of the authority for forest and wild lives, Kumera Wakjira told ESAT that the fire is believed to have been sparked by human activity in the park.

He said wind and dry grass has made the fight against the fire an uphill battle.

The fire has now been restricted to ravines and prevention measures were being taken to stop it from reaching the forest part of the park, according to Wakjira.

The Semien Mountains National Park is home to endemic animals like the Walya Ibex, Gelada baboon and the Semien fox, also known as the Ethiopian wolf.

Experts warn that fire could be recurrent during the dry season and advise the public to take caution in their activities at parks.

Ethiopia has requested Kenya, France and South Africa for help in providing helicopters to fight the fire. The countries have expressed willingness to help, according to the forest and wild lives authority.