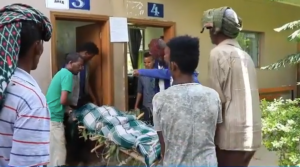 An administrator for the North Shewa Zone disclosed that 27 people were killed in the weekend attack in Ataye and other towns by groups he described as “organized, armed and well trained forces.”

The administrator, Tefera Wondimagegnehu, told Addis Zemen, the state run Amharic daily that another 27 people were injured in the attack that was mainly carried out in Ataye, a town sitting 168 miles north of the capital Addis Ababa.

He however declined to name the group responsible for the attack saying a joint committee by federal and regional authorities would get to the bottom of the crises and will soon disclose the identity of the perpetrators to the public.

Other local officials in the region have however been blaming soldiers for the Oromo Liberation Front (OLF) for the attack. Head of security for North Shewa administration, Kassahun Embiale said on Sunday that soldiers of the OLF were responsible for the deadly attack, looting and kidnapping of women and children.

In a telephone interview with ESAT today from Bahir Dar, the capital of the Amhara region, deputy head for security, Gedibe Hailu lay the blame squarely on OLF soldiers.

In an interview yesterday with the Amharic service of Deutsche Welle, a spokesperson for the Oromo Liberation Front (OLF), Tolera Adeba, denied the presence of any OLF soldiers in the Amhara region.

Tefera Wondimagegnehu, the administrator for North Shewa Zone told Addis Zemen that calm and order have been restored in the region with the deployment of regional and federal forces.