Ethiopia to go ahead with census despite concern over its timing 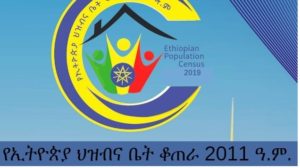 The Ethiopian Statistics Agency said it will go ahead with the population and housing census as scheduled on April 7, 2019 despite concern that displacement and deadly conflicts in some areas of the country would make the job difficult.

Public relations head with the Agency, Safi Gemede told ESAT that the displaced would be resettled back to their villages in the next two months and hence the census should not face any difficulty.

There have been several concerns expressed over the timing of the census since the Agency announced last week that the population and housing census would be conducted beginning April 7, 2019 and ends on April 28, 2019. Violent and deadly communal clashes and the resulting displacement in some areas of the country were worrisome to many.

“There could be some problems here and there but the census would be conducted as scheduled,” Mr. Gemede told ESAT’s Mesay Mekonnen.

The PR head said the government would make sure the safety and security of those conducting the census would be guaranteed. He said government structures down to regional and district levels would be in charge of the process.

Current estimate by Wordometer shows Ethiopia’s population has reached 109,084,800. The country conducts census every ten years but the last census scheduled for 2017 has been delayed due to political unrest in the country.

Meanwhile, the Minister of Peace said over one million displaced people have been resettled to their villages in the last few months.

Presenting a six month report to the Parliament, Muferiat Kamil said 1,020,000 people have been resettled and all the remaining displaced citizens would go home soon. She said conflict prevention works have also been done in Gambella, Southern Ethiopia and Oromo regions to preempt conflicts before they arise.

Over 900 people suspected of inciting and perpetrating violence have been arrested, according to the Minister.