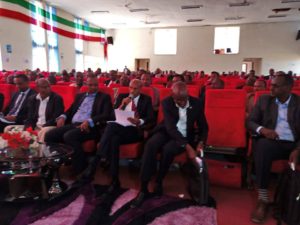 The council of the Somali regional government has lifted immunities of 12 former officials over human rights violations and high level corruption.

The regional attorney general said in a press statement that the the former officials had a hand in the deadly ethnic violence last July in the regional capital Jigjiga where at least 59 people were killed and 266 wounded.

Six of the accused are reportedly outside the country.

The attorney said formal federal charges have been brought against the accused.

Lead among the officials whose immunities have been lifted is the former vice president of the region, Suad Ahmed Farah, who is accused of plotting to overthrow the current leaders. She is accused of colluding with her husband who lives in Istanbul and the personal security guard for the former president of the region, Abdi Mohamoud Omar, who is being tried in Addis Ababa.

The former regional speaker of the house, Mohammed Reshid, the former interim regional administrator, Ahmed Abdi and the former head of the office for the central committee of the Somali People’s Democratic Party, Kedir Abdi were also among the officials whose immunities have been revoked.

Meanwhile, the ex-president of the region, Abdi Mohamoud Omar a.k.a Abdi Illey, who is being tried for a range of human rights violations said all charges against him were not true. He told a court in Addis Ababa that the charges were politically motivated.