Ethiopia: Several killed in renewed clashes between Qimant and Amhara 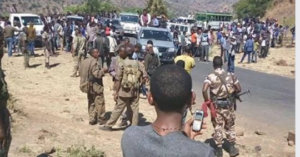 Several people lost their lives and houses turned into ashes in renewed clashes between the Qimant and Amhara communities in Gondar, northern Ethiopia.

Peace and security head for the Amhara region, General Asamnew Tsege told ESAT that the violence had also resulted in the displacement of thousands of people. He blamed the Tigray People’s Liberation Front (TPLF) saying it was providing financial assistance and weapons to one of the parties.

Kidnapping and looting have also been reported.

The regional head of communication affairs, Asemahgn Asres also confirmed the news in a press statement saying lives were lost and several houses have been set on fire in east Dembiya district, central Gondar.

He said groups bent on destabilizing the region have smuggled weapons including heavy artillery into the area.