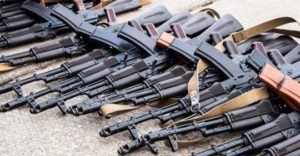 Police said they have seized 43 kalashnikovs and 13,000 ammunitions as it was being transported from the Gambella region in western Ethiopia to the city of Gondar in the Amhara region.

Loca media reports indicate that the driver of the truck carrying the illegal weapons have also been arrested.

Police for the Amhara region also said investigations were underway.

There has been an increase in the illegal movement of weapons and various ammunitions over the past few months with authorities making several arrests.

Thousands of amos and hundreds of kalashnikovs and pistols have been seized in various parts of the country.

The government says a proclamation is in the making to punish those who are involved in the illegal movement of weapons.

Meanwhile, gold worth 143 million dollars has been seized at a custom checkpoint in Awash. Contraband merchandises worth tens of thousands of dollars have also been seized.