ESAT team to travel to Ethiopia 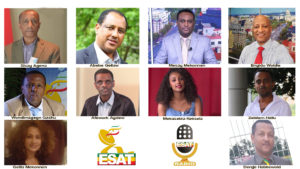 A team of journalists from the Ethiopian Satellite Television and Radio (EAST) in Washington, DC, London and Amsterdam will travel to Ethiopia on Thursday to lead fundraising events, chart out future plans and define the station’s role in the changing landscape of media and politics in the country.

Established 8 years ago with the mission to help the struggle to bring democracy and justice to the country, ESAT has been transmitting news and programming from abroad via satellite. It has been dropped from satellite for at least 25 times and its transmissions have been the target of jamming countless times by the TPLF led government in Addis Ababa.

When a group of reformists led by a new Prime Minister, Abiy Ahmed, took political power in April, one of the measures they took was to lift a ban on independent and critical media. In June 2018, the government lifted restrictions on 246 websites and TV channels, mostly working from abroad.

Now that the government has lifted its restrictions on independent media, ESAT has opened its office in Addis Ababa and the construction of a new studio is underway.

ESAT was established by a group of exiled journalists who escaped persecution in their home country. Some had served prison time on trumped up charges brought against them by TPLF kangaroo courts. Diaspora Ethiopian support groups all over the world, who wish to see democratic changes in their country, have financed the station in a monthly subscription and annual fundraising events.

The journalists have been in exile from 8 to 20 years.

ESAT’s major event will take place on Saturday February 16, 2019 at Addis Park’s Millenium Hall in Addis Ababa where star singers will perform to a sold-out crowd.

The team will also travel to major cities in Ethiopia in its month long stay.