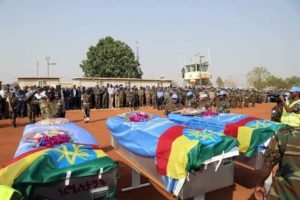 The bodies of four Ethiopians killed Saturday when a military helicopter crashed inside the compound of the UN peacekeeping mission in the disputed region between South Sudan and Sudan arrived home on Sunday.

According to a statement by the United Nations, 23 passengers were on board when the helicopter crashed during a routine reconnaissance flight from Kadugli in Sudan to Abyei in South Sudan, the oil rich disputed region between the two countries.

Ten passengers were injured, three critically, when the MI-8 helicopter crashed in the compound of the UN mission.