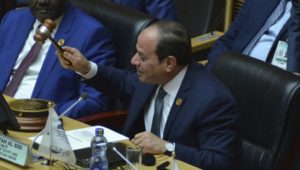 The summit of the heads of state and government has focused on a number of issues including, peace and security in Africa, institutional reform and financing of the Union and continental free trade area. But this year’s theme for the summit is “Refugees, Returnees and Internally Displaced Persons: Towards Durable Solutions to Forced Displacement in Africa.” Africa is host to over one-third of the world’s forcibly displaced people. Statistics show that there are about 6.3 million refugees and 14.5 million internally displaced people on the African continent.

It was the first time for an Egyptian leader to attend the continental summit in Addis Ababa since an assassination attempt on former president Hosni Mubarak in June 1995. Two of his bodyguards and two of the gunmen, believed to be Egyptian fundamentalists, were killed in the botched attempt to assassinate Mr. Mubarak.

One of the highlights of the summit in Addis Ababa was the unveiling of the statue of Emperor Haile Selassie, who is one of the founders of the Organization of African Unity, which later became the African Union.

The Emperor’s statue is the second to be erected at the AU headquarter. In 2012, the statue of Ghanaian Pan-Africanist Kwame Nkrumah was unveiled during the inauguration of the new AU headquarters in Addis Ababa.

Ethiopians have campaigned for equal recognition of the Emperor, considering his contribution to the Pan-African movement and the formation of the then Organization of African Unity (OAU), as well as his role in the fight against colonialism. The former Ethiopian Prime Minister, Meles Zenawi, however campaigned to the contrary, calling the Emperor a ”feudal dictator” and insisted only Nkrumah deserve the recognition.

The continental body made a decision that the Conquering Lion of the Tribe of Judah, His Imperial Majesty Haile Selassie I, King of Kings of Ethiopia, Elect of God, deserve a place at the headquarters of the African Union.

An Ethiopian sculptor and painter, Bekele Mekonnen, carved the bronze statue that will remind future generations of Africans the contribution of Ethiopia and its king to the formation of the continental body.

Meanwhile, Prime Minister Abiy Ahmed told the gathering African leaders at a gala dinner in Addis Ababa that his country was undergoing political and economic reforms under the philosophical motto of “medemer” an Amharic word for synergy and togetherness. He and encourage other Africans to jump on the bandwagon.