83 Ethiopian Jews arrive in Israel amid protest against police brutality 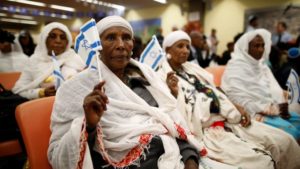 Eighty-three descendants of Ethiopian jews, also known as felashamura, have arrived in Israel yesterday as part of the government’s plan to take 1000 of the 8000 remaining in Ethiopia.

An Israeli cabinet decided in October last year to bring in 1000 descendants of the Ethiopian jews out of the 8000 who are waiting to make their Aliyah in Gondar and Addis Ababa. The 1000 were chosen because they already have relatives living in Israel, who had left Ethiopia in earlier Aliyah.

The repatriation came amid protest by the Ethiopian Israelis against racism and police brutality.

Thousands of Ethiopian Israelis took to the streets in Tel Aviv last week after a lethal shooting of an Ethiopian immigrant by a police officer. Reports say the victim, Yehuda Biadga, was mentally unstable.

The Ethiopian immigrants say they face racism and police brutality in Israel. The protesters demand an investigation into the fatal shooting.