Hindering withdrawal of troops from Ethio-Eritrea border by locals in Tigray violation of constitution, says a Major General 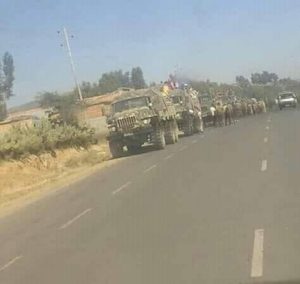 A Major General said the hampering of Ethiopian troops withdrawal from the Ethio-Eritrea border by locals in Tigray was unconstitutional and called on the government to take measures against those who hatched the illegal act.

Locals in Tigray yesterday blocked a convoy of Ethiopian troops withdrawing from the Zalambessa front demanding that a replacement army should arrive before withdrawal by the existing troops.

Ethiopia and Eritrea have been withdrawing their troops from border areas following a peace declaration signed in July that ended two decades of enmity. In April 2018, a new Prime Minister in Ethiopia accepted a two decade old decision by a boundary commission that was set up to resolve disputes over territories.

In a brief interview with ESAT, Major General Melaku Shiferaw, a former director of intelligence and analysis with the Ethiopian defense said the move by the locals was a serious violation of the constitution which clearly stipulates that the army would only take orders from the Prime Minister and his defense chief of staff. The Major General said he believed the blockage of troops withdrawal by the local people was a result of conspiracy by elements in Tigray that stood against the ongoing political reforms in the country.

“It was an attempt by those elements in Tigray to sling mud at the peaceful relationship between Ethiopia and Eritrea. There is no reason to keep troops at the border when there is no threat from Eritrea,” Maj. Gen. Shiferaw told ESAT.

“These elements were deliberately spreading false rumours that Eritrea would invade Ethiopia,” he said adding that “the elements were also trying all tricks to keep hiding in Tigray to run away from facing justice for the crimes they had committed” in the administration prior to Dr. Abiy Ahmed.

The news was first broke by the BBC Amharic Service in Ethiopia that quoted sources as saying that the action by the locals was prompted by the recent directive by Eritrea for a strict vetting of people crossing at two border checkpoints.

The new vetting process by Eritrea was not officially announced by its government, nor by the Ethiopian side. Asked to comment on the issue, spokesperson for the Ministry of Foreign Affairs of Ethiopia, Meles Alem said last week in Addis Ababa that his Ministry “had no information” on the new development.

Following the peace declaration signed in July, the two countries opened their border, withdrawn their troops and resumed diplomatic relations. The Tigray People’s Liberation Front (TPLF), the party in power for 27 years until it was defeated in March by reformists led by Abiy Ahmed, had stood against political reforms and frowned upon improving relations between Ethiopia and Eritrea.