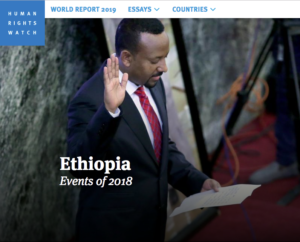 The Human Rights Watch said the human rights situation in Ethiopia has transformed for the better after a new Prime Minister was installed last April.

“After years of widespread protests against government policies, and brutal security force repression, the human rights landscape transformed in 2018 after Abiy Ahmed became prime minister in April,” said the rights watchdog in its annual review of human rights around the globe.

“Ethiopia, under popular pressure, replaced a long-abusive government with a prime minister who embarked on an impressive reform agenda.”

The rights group noted that the government of Abiy Ahmed has released political prisoners, admitted that torture was committed against prisoners. Lifted restriction on opposition parties, the Internet and private media,

The group said challenges remain as the Parliament is still fully controlled by the coalition that ruled the country for over 27 years.

“With the ruling Ethiopian People’s Revolutionary Democratic Front (EPRDF) controlling 100 percent of the seats in parliament, the institutional and legal impediments for sustained political space remain a challenge.”