Ethiopia: Residents of Shire in Tigray blocked movement of troops 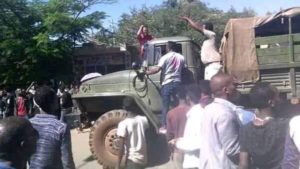 Residents of the town of Shire in Tigray blocked movement of troops deployed to the area. It is the second time for the movement of the national army to be hindered in Tigray.

Last week, the army faced a similar hindrance in Zalambessa town, where residents blocked a convoy of soldiers withdrawing from the Zalambessa front.

Ethiopia and Eritrea have been withdrawing their troops from border areas following a peace declaration signed in July.

Social media activists have shared photos and videos of youth in Shire blocking a convoy, and later parading the military trucks in a stadium. Reasons for the blockage of troops by the residents were not clear but according to the activists, residents have demanded for the trucks and weapons to stay in Tigray, but that the soldiers could leave. 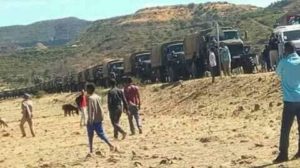 Last week, a Major General said the hampering of Ethiopian troops withdrawal from the Ethio-Eritrea border by locals in Tigray was unconstitutional and called on the government to take measures against those who hatched the illegal act.

In an interview with ESAT, Major General Melaku Shiferaw, a former director of intelligence and analysis with the Ethiopian defense said the move by the locals was a serious violation of the constitution which clearly stipulates that the army would only take orders from the Prime Minister and his defense chief of staff.

The Major General said he believed the blockage of troops withdrawal by the local people was a result of conspiracy by elements in Tigray that stood against the ongoing political reforms in the country.

On Monday, Ethiopian Prime Minister Abiy Ahmed and Eritrean President Isaias Afwerki opened their western border crossing in what is being described as a sign of fast improving relations between the two Horn of Africa neighbors.

The western border, Humera in Ethiopia and Oum Hajer in the Eritrean side, has been closed for the last twenty years following a border war that broke out in 1998.

On September 11, 2018, on Ethiopian and Eritrean new year’s day, the two leaders reopened the Bure and Zalambessa border crossings, two places that have seen the brunt of a two year trench war in 1998-2000.

Eritrea however recently issued a directive for a strict vetting of people crossing at the two border checkpoints. That move prompted uneasiness in Tigray and led locals to block a convoy of Ethiopian troops withdrawing from the Zalambessa front last week .