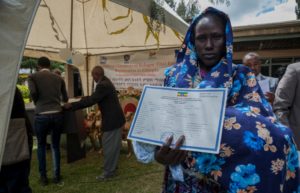 Ethiopia’s new refugee law which grants more rights to refugees, such as work permits and access to education, faces opposition from the Anywaks of Gambella who said the law did not take the reality in the region into account.

Gambella is host to most of the about 900,000 refugees the country is currently hosting.

A peace and human rights researcher, Ajit Miru (PhD), who is a Gambella native, says the law threatens the livelihood of the Anuaks who are much less in number than the refugees in Gambella.

Gambella, in western Ethiopia, hosts about 500,000 refugees from South Sudan.

“The law that gives equal rights to refugees in Gambella, who are way more than the actual residents in the region, was approved by the Parliament without the consent of a single representative of Gambella,” Miru said while also commending the good intention of the Ethiopian government in helping refugees in the country.

According to Dr. Miru, the population of Gambella is about 300,000 but the region hosts about 407,000, and hence, the law has really become a concern to the locals. “Besides, the refugees are well armed and the law should have taken the safety concerns of the people into consideration,” Miru said in an interview with ESAT.

Miru suggested other regions in Ethiopia to share the burden of refugees to lessen the load on Gambella; and called for the government to review the law.

He said the Anuak community has been petitioning to the government protesting the law.

The UNHCR and other refugee agencies welcomed Ethiopia’s refugee law calling it one of the most progressive refugee policies in Africa.

Ethiopia hosts close to 1M refugees, mainly from neighbouring South Sudan, Somalia, Sudan and Eritrea. There have also been recent addition of refugees from Yemen and Syria.