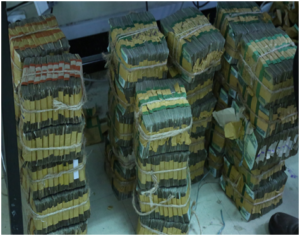 The Addis Ababa Police Commission said it has seized over 2,000 weapons, about 55,000 amos as well as thousands of cash in the last six months of crackdown against scoundrels.

The statement by the capital police commission said 2,383 various types of weapons and 55,615 ammunitions have been seized in a joint operation with the National Intelligence and Security Services and other relevant law enforcement bodies.

The illegal weapons were mostly hidden in vehicle parts while the money was changing hands under the guise of legitimate businesses. Thousands of fake currency notes were also caught.

Tips from the community and collaboration with other law enforcement agencies had led to the arrest of suspects and exhibits, according to the police commission.