Ethiopia: Police commander tuck away 498 pistols at his residence 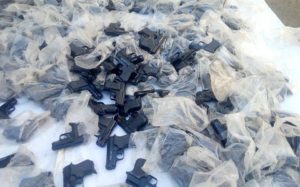 A police commander in the city of Bahir Dar has been caught with 498 pistols at his residence.

The news comes amid a growing concern for an increased movement of illegal weapons throughout Ethiopia.

In recent months Ethiopian law enforcement has been intercepting large number of weapons which has become a daily story in the news media.

Police in Bahir Dar said it was unusual for a member of the law enforcement community to be caught in a crime that he should have been preventing.

The alleged horder of pistols is under arrest, according to police who said they believe there could be other partners in the crime.

Last week, police in the northern Ethiopian town of Mettema intercepted nearly 5,000 ammos as it was heading to innland from the border.

The bullets for pistols and Bren assault rifles were estimated to cost about 11,000 dollars.

The regional customs office said the increasing illegal movement of weapons had become a menace to the political and economic reform endeavor underway in the country.