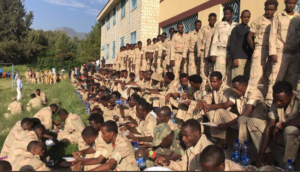 835 combatants of the Oromo Liberation Front (OLF) have been captured in the troubled region of Benishangul-Gumuz and the adjacent western Ormo region, according to the communication Bureau of the Oromo regional government.

The Bureau said based on information obtained from a Command Post set up to quell violence that beset the two regions, several weapons and vehicles as well as other items of interest have been seized.

The statement said government offices and businesses have opened their doors and social activities and normalcy have been restored.

Investigators and federal prosecutors have been dispatched to the area to bring to justice people suspected of criminal involvement.

Early this week, a rebel commander for the army wing of the Oromo Liberation Front (OLF) in Southern Ethiopia had accepted a peace offer mediated by the Guji Abba Gedas, traditional leaders of the Oromo.

According to Jilo Meno, a Guji Abba Gada, based on the outcome of the a week long peace conference, soldiers of the OLF who are in Guji Zone are checking into camps set up for education and reintegration back into the community.

Hundreds of OLF combatants have either surrendered or voluntarily checked into demilitarization camps in response to a peace call by the government.

Soldiers and leaders of the OLF returned to Ethiopia from their base in Eritrea last September following a peace deal with the government. But the soldiers have since been accused of perpetrating killings, looting and are blamed for other deadly violences.