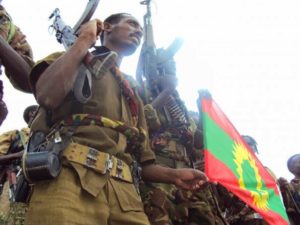 News of the killings of the two farmers is feared to cast a shadow over recent peace agreements reached between the Front and the Oromo regional government.

Public relations head with the Amaro district, Agegnehu Bekele told ESAT that the two farmers were killed while on their daily routine, just keeping an eye on their cattle.

“The soldiers shot and killed the two farmers and then took away the cattle,” he said.

“We have heard talk of peace agreement between the government and OLF reached in Addis Ababa, but there was never peace in our district. OLF soldiers are still wreaking havoc,” Mr. Bekele said in a telephone interview from Amaro.

He said 78 farmers were killed and 113 injured in the last two years of
violence perpetrated by OLF.

Last week, the OLF had agreed to disarm and demobilize its soldiers after mediation by Abba Gedas, who brought together leaders of the OLF and the Oromo Democratic Party (ODP), the party of the Prime Minister, for a peace conference in Addis Ababa. They have agreed that the OLF soldiers would check into camps as part of the demobilization and education process to be reintegrated back to the society.

Soldiers and leaders of the OLF returned to Ethiopia from their base in Eritrea last September following a peace deal with the government. But the soldiers have since been accused of perpetrating killings, looting and are blamed for several deadly violences in the region.

The government said it had captured hundreds of OLF soldiers but there still remains significant numbers roaming free in western Ethiopia.