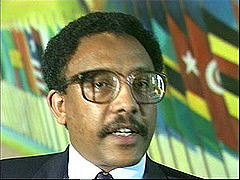 The first speaker of the House of People’s Representatives of Ethiopia has passed away of natural causes in the United States.

Dawit Yohannes had been instrumental in the early years of the current government, serving as secretary of the commission set up to draft the constitution during the transitional government in the early 90s.

In 1995 he was elected the first speaker of the House of People’s Representatives and served for two terms until 2005.

In May 2006 he was appointed permanent representative and Ambassador plenipotentiary of Ethiopia to the United Nations.

The current House Speaker, Tagesse Chafo credited Dawit Yohannes for “modernizing the parliament” and said he had shown “exceptional leadership” during his tenure.

The former house speaker was educated at the Addis Ababa University, Georgetown University and University of Amsterdam.

Born on 10 October 1956 in Addis Ababa, Dawit Yohannes is survived by his wife and three children.