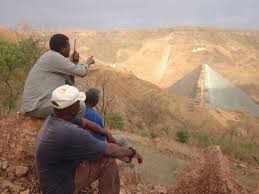 Federal auditors revealed that consultants at a government irrigation project have cooked up extremely inflated costs resulting in the loss of hundreds of millions of dollars in the form of payments to a company belonging to the Tigray People’s Liberation Front (TPLF).

Presenting their report to a budgetary committee of the House of People’s Representatives, federal auditors also exposed that the Zarema May-Day Irrigation Project was launched without feasibility studies.

According to the audit report, the consultancy work has been awarded to an Italian firm, SGI Studio Galli and the construction of the dam to Sur Construction, a company owned by the TPLF without legal bids.

The report said the project was run on orders of unnamed authorities without checks and balances resulting in the misappropriation of 14.5B birr ($571.9M) way far from the originally estimated cost of the project, which is 4.1B birr ($146.4M).

The dam on the Zarema river, a tributary of the Mereb river, had faced opposition from monks in the nearby Waldeba monastery, who decry the encroachment of the project into their holy site. Several monks were tortured, imprisoned and made to flee the monastery for opposing the project. The monks accuse the TPLF of perpetrating the persecution.

The dam and the irrigation project for sugar development that began in 2012 in Welkait has not yet been completed.

Sur Construction has also been dominating the headlines this week for yet another transgression. It had refused a court warrant for searches into its construction vehicles after locals accused that the company trucks have been used to transport weapons that were used in clashes between the Qimant and the Amhara groups. The company is also being accused of fanning the flames of communal clashes favoring one side.

As locals blocked the progress of trucks leaving project sites in west Gondar on Wednesday, soldiers escorting the company’s trucks opened fire killing at least 6 and injuring 18 others, according to the Amhara regional government.