Ethiopia, Eritrea reopen yet another border 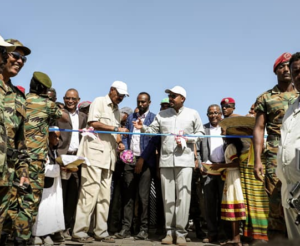 Leaders of Ethiopia and Eritrea today opened their western border crossing and celebrated Orthodox Christmas together, a sign of fast improving relations between the two Horn of Africa neighbors.

The western border, Humera in Ethiopia and Oum Hajer in the Eritrean side, has been closed for the last twenty years following a border war that broke out in 1998.

Ethiopian Prime Minister, Abiy Ahmed and Eritrean president Isaias Afwerki cut ribbons together as heads of the Tigray and Amhara regions, two regions that share border with Eritrea, look on with smiles.

On September 11, 2018, on Ethiopian and Eritrean new year day, the two leaders reopened the Bure and Zalambessa border crossings, two places that have seen the brunt of a two year trench war in 1998-2000. But Eritrea recently issued a directive for a strict vetting of people crossing at the two border checkpoints. That move prompted uneasiness in Tigray and led locals to block a convoy of Ethiopian troops withdrawing from the Zalambessa front last week .

The two sides have been withdrawing their troops from border areas following a peace declaration signed in July that ended two decades of enmity.

The peace declaration signed by the two leaders has also led to the resumption of diplomatic relations, transportations and the reconnection of direct telephone lines between the two countries.