Ethiopia: Dozens killed in ethnic attack in Kaffa zone as over 30,000 people displaced 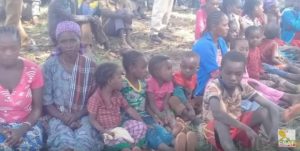 At least 37 people, including children, have been killed in southwestern Ethiopia in what a zonal administrator said was an attack against the people of Kembata and Tembaro, who settled in Keffa zone to escape from drought.

The victims had settled in Kaffa in a government program 15 years ago and have worked hard to prosper themselves and the area they had called home.

The administrator of Kembata and Tembaro, Dr. Takele Necha, told ESAT that the attack was blamed on people who raise livestock in Kaffa. He said arrows and guns were used in the attack.

The crisis began six years ago and since last September, it had become clear that the attack was ethnic motivated and resulted in high number of casualties and displacement. According to the administrator, who said he had personally visited the victims, the last few weeks have been the deadliest.

At least 30,000 people have been displaced since September and are sheltered in schools and government institutions. The displaced makes up between 80 to 90 percent of the Kembata and Tembaro people who called Kaffa home.

The administrator said calls for the government to intervene to stop the deadly attack hasn’t gotten a quick response. Slow response by the government is to blamed for the high number of casualties, he said.

Dr. Necha told ESAT’s Mesay Mekonnen that the defense forces have now been deployed to the area, although too little too late.

“It would be difficult to settle the displaced back to their homes unless peace and normalcy is restored in the area and people feel they would be safe,” the administrator said.