Ethiopia: Deputy chief of staff defends his soldiers for killings in west Gondar, says army in control in Oromo region 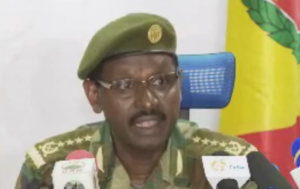 Deputy chief of staff of the army defended soldiers who killed six people in west Gondar saying they were ambushed by gunmen who opened fire injuring two soldiers.

General Berhanu Jula met the press today in Addis Ababa for a briefing on security situations in the country.

The Deputy chief of staff said based on complaints and demands of residents of west Gondar, the army had searched vehicles belonging to Sur Construction, a company locals accused of transporting weapons and involvement in clashed between the Amhara and Qimant communities.

The General said after the search had been completed and the convoy resumed progress, gunmen opened fire at water delivery trucks escorted by the army while civilians were in close proximity. He said soldiers returned fire in self defense resulting in loss of lives in the crossfire.

The Amhara regional government accused that the soldiers killed 6 and injured 18 in Wednesday’s incident.

Speaking about blockage of the army’s withdrawal from Shire and Zalambessa fronts in Tigray a week ago by residents of the area, the deputy chief of staff said that in discussions with the community, it was revealed that those who encouraged the public to block the army had “political agenda” and were trying to gain “political benefits.” the General did not name the group accused of inciting the public in Tigray to hinder the movement of troops.

“The residents in Shire and Zalambessa were falsely told that they would come under attack from a neighboring country,” the General said in an apparent reference to Eritrea, which had opened its border and improved relations with Ethiopia following a peace deal signed in July. But some in Tigray still have resentment against the former foe that share border with the region.

The General reiterated his earlier remarks that the army has now full control of the situation in the restive west Oromo region where the Oromo Liberation Front (OLF) is accused of fomenting deadly violence in clashes with government forces and residents that resulted in the death of dozens of people and the displacement of thousands of people.