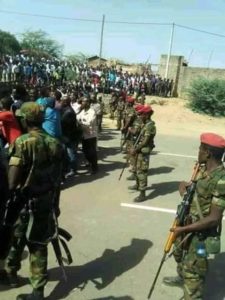 Government forces shot and killed eight people in Metema and injured over twenty others in a confrontation with locals who blocked the progress of vehicles belonging to the party conglomerate EFFORT.

Residents of Genda Wuha and Qokit yesterday blocked vehicles belonging to Sur Construction alleging that the vehicles which belong to EFFORT, the business empire of TPLF, were responsible for smuggling weapons that were used in deadly clashes between the Qimant and Amhara communities, according to a source who spoke to ESAT from the town of Metema.

The source said government forces that were escorting the trucks indiscriminately opened fire at a crowd of people who were on the streets to block the progress of the trucks. The source said he counted eight bodies and over 20 casualties. A ten year old is among the dead.

The people were also protesting that Sur Construction was quitting its project in the area, the Chilga Project, and the trucks were leaving the site.

Previously, a similar protest in the city of Bahir Dar blocked the progress of several trucks and machineries as they were trying to abandon project sites.

A month ago, the House of People’s Representatives instructed for the investigation of the army deployed in the area for allegedly being partial when dealing with the conflict between the Qimant and Amhara groups.

Security head with the Amhara Region, Brigadier General Asmnew Tsege told ESAT a while ago that there were individuals within the army who were responsible for favoring one group over the other and they would be held responsible for their misconduct.