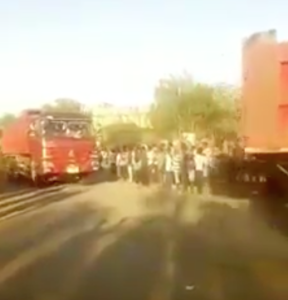 The killing of civilians by the army in western Amhara region yesterday drew a sharp criticism from local officials over the incident and the conduct of the military in dealing with grievances by local people.

According to head of the regional security, six people were killed and 18 injured when government soldiers escorting construction vehicles opened fire in Metema. The locals were demanding the construction trucks to be searched before they leave the area on suspicion that the vehicles, belonging to Sur Construction, were used to smuggle weapons which contributed to deadly violence in the region between the Amhara and Qimat people.

Sur Construction, which is also under fire for alleged involvement in high level corruption, belongs to EFFORT, the business empire of the TPLF.

Administrator of the Amhara region, Gedu Andargachew said in a statement that the action by the army was “irresponsible” and that the regional government would soon send a team to the area to get to the bottom of what happened.

Head of the regional security, Brigadier General Asamnew Tsege said on his part that Sur Construction has refused a court warrant for searches into the vehicles, which he said was the source of the conflict between the company and the locals who have legitimate mistrust about its activities.

The security head told ESAt that it was baffling that the company’s vehicles were escorted by the military instead of the regular regional police force.

Residents of Genda Wuha and Qokit yesterday blocked vehicles belonging to Sur Construction alleging that the vehicles which belong to EFFORT, the business empire of TPLF, were responsible for smuggling weapons that were used in deadly clashes between the Qimant and Amhara communities, according to a source who spoke to ESAT from the town of Metema.

The source said government forces that were escorting the trucks indiscriminately opened fire at a crowd of people who were on the streets to block the progress of the trucks. The source said he counted eight bodies and over 20 casualties. A ten year old is among the dead.