Ethiopia: Administrator says people in Tigray shouldn’t be concerned about movement of army in region 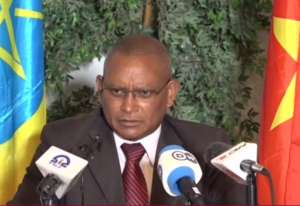 Vice administrator of Tigray in northern Ethiopia says people in the region should not feel unease about the movement of troops saying the army was just doing what is “legitimate” and “carrying out its responsibilities” as a national force.

Debretsion Gebremichael was reacting to recent move by the people in Zalambessa and Shire who blocked the movement of troops deployed near the border with Eritrea.

The two countries have been significantly demilitarizing their border after a peace deal was signed in July and the subsequent reopening of their border crossings.

“People should not be anxious about the movement of troops who were just doing their job,” Gebremichael said in a press statement as reported by mainstream media in Addis Ababa. “People in Tigray should just focus on development works in the region.”

Gebremichael’s statement came after residents of the town of Shire in Tigray yesterday blocked movement of troops deployed to the area. It was the second time for the movement of the national army to be hindered in Tigray. Last week, the army faced a similar hindrance in Zalambessa town, where residents blocked a convoy of soldiers withdrawing from the Zalambessa front.

Ethiopia and Eritrea have been withdrawing their troops from border areas following a peace declaration signed in July.

The reopening of the western border on Monday, Humera in Ethiopia and Oum Hajer in the Eritrean side, was the third checkpoint to be reopened so far.

In september, the two countries reopened the Bure and Zalambessa border crossings that were closed when war broke out in 1998. Eritrea recently issued a directive for a strict vetting of people crossing at the two border checkpoints, a move that prompted uneasiness in Tigray and led anxious locals to block a convoy of Ethiopian troops withdrawing from the Zalambessa front last week.