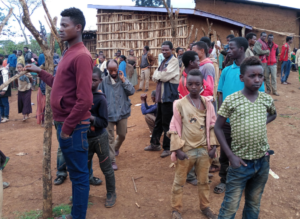 At least 25 people were killed in the last few days of ethnic violence in Kefa and Guji Zones in southern Ethiopia.

15 people have been killed in Guji Zone in renewed ethnic clashes since Friday.

In June 2018, at least 200 people were killed in clashes between the Guji and Gedeo while hundreds were displaced from the villages.

In Amaro, near Guji, attack by soldiers of the Oromo Liberation Front (OLF) has left four people dead, according to residents who spoke to ESAT. the residents have also accused the OLF of setting fire on their harvest and cattle raiding.

In Decha district of Keffa zone, at least ten people were killed in violence that targeted people who had settled in the area 15 years ago. The victims had come from Kembata, Sidama and Wolayta after drought hit the region. Reports say the locals were demanding the victims to leave their turf.

In a positive development, violence and displacement in areas bordering the Oromo and Benishangul regions have been put under control, according to a command post that was set up to quell deadly violence in the region. Dozens of people have lost their lives in ethnic based attacks in Benishangul and west Oromo regions. The command post says efforts were underway to repatriate the displaced.