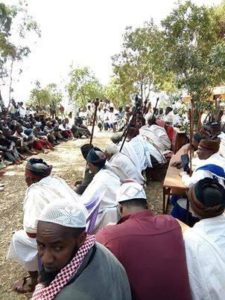 A rebel commander for the army wing of the Oromo Liberation Front (OLF) in Southern Ethiopia had accepted a peace offer mediated by the Guji Abba Gedas, traditional leaders of the Oromo.

The report by FBC in Addis Ababa says Elias Gambella Golo, the commander of OLF army in southern Ethiopia, had welcomed a call for peace by the Abba Gedas.

A ‘peace week’ was declared last week in the troubled west Guji zone in southern Ethiopia in a bid to bring reconciliation and normalcy in a region beset by deadly violence in recent months. The Abba Gedas were holding a week long peace conference in Adola town.

According to Jilo Meno, a Guji Abba Gada, based on the outcome of the peace conference, soldiers of the OLF who are in Guji Zone are checking into camps set up for education and reintegration back into the community.

The Guji Abba Gadas denounce violence as a form of political struggle and said all political groups should respond to calls by the government for peaceful political process.

Leaders of the OLF and its army returned to Ethiopia from their base in neighboring Eritrea in September following a peace deal signed with the government in Asmara. The army has however been accused of killings, robbery and violence that led to the displacement of peaceful residents.

Over a dozen people were killed in last month while the violence has so far left at least 7,000 people displaced.