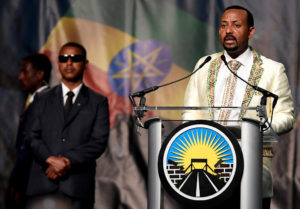 FILE PHOTO: Ethiopia’s Prime Minister Abiy Ahmed addresses his country’s diaspora, the largest outside Ethiopia, calling on them to return, invest and support their native land with the theme “Break The Wall Build The Bridge”, in Washington, U.S., July 28, 2018. REUTERS/Mike Theiler/File Photo

The Ethiopian Diaspora Agency says it has finalized structural and legal frameworks to launch its project which would facilitate the participation of Diaspora Ethiopians in development endeavors of the country, while also ensuring that their rights are protected in their country of origin.

Local media reports quoted Agency’s Director, Selamawit Dawit as saying that it is hoped that when the Agency becomes operational, Diaspora Ethiopians would be one of the actors in Ethiopia’s development efforts.

The Agency would soon begin registration of Diaspora Ethiopians to gather the information needed to carry out it projects.

Some of the goals of the Agency include transfer of knowledge and technology, and augmenting Diaspora’s role and participation in trade, investment and tourism.

The Agency says it would further publicize its mission to the Diaspora and stakeholders in a bid to create synergy for the success of its works.

One of the priorities of the government of a reformist Prime Minister as soon as it took the helm of political power in the Spring of 2018 was to engage Diaspora Ethiopians. They have been opposing dictatorship in their country and have remained the voice of compatriots back home when their basic human rights were violated by autocratic rulers. They have been denouncing the way their country was run by an ethnic coalition of the EPRDF and have exposed its crimes for the world to see.

As soon as he took office, Abiy Ahmed toured America and Europe with the motto “Breaking Walls – Building Bridges” and met thousands of Ethiopians. He challenged them to chip in a dollar a day “deducting from their daily expenses of Macchiato.”

A significant number of Diaspora Ethiopians demand their government to allow dual citizenship so as to allow them do away with hurdles facing non-citizens.