171 arrested in western Ethiopia in connection with deadly violence, displacement 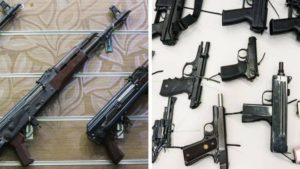 A command post set up to monitor security in western Ethiopia says 171 individuals have been arrested in connection with deadly violence and displacement in Benishangul and west Wellega.

The report by the Ethiopian television said illegal weapons and cash have also been seized. About 100 suspects were arrested in the Oromo region while 71 were from Benishangul-Gumuz region.

Last month, 208 people were arrested in connection with deadly ethnic violence in areas bordering the Oromo and Benishangul Gumuz regions in Western Ethiopia.

The presence of soldiers of the Oromo Liberation Front (OLF) in western Ethiopia has also worsened the security situation with the government accusing the Front of instigating and perpetrating killings and displacement.

The suspects arrested today have allegedly used government vehicles, including ambulances to commit the violence. The statement by the command post says 14 vehicles including 9 ambulances have been caught with the suspects.

1.9 million birr (67,857 USD) and another 12,000 USD cash was also caught in west Wellega and Benishangul, and police is conducting further investigations.

At least 40 people were killed in recent months in ethnic violence in areas bordering the Oromo and Benishangul Gumuz regions while tens of thousands have been displaced.