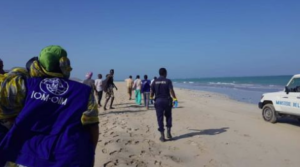 The remains of 30 bodies have so far been recovered after two boats carrying 130 African migrants capsized off the coast of Djibouti on Tuesday.

The International Organization for Migration (IOM) said the tragic accident happened off Godoria, a locality in the Obock region of northeast Djibouti.

The IOM quoted witnesses as saying that the boats capsized roughly 30 minutes after leaving due to overloading and heavy swells.

A total of 16 survivors have been recovered until Wednesday.

The IOM says it manages a Migrant Response Centre (MCR) in Obock, where hundreds of Yemen-bound migrants are assisted each year if they choose repatriation to their countries of origin under an IOM operated voluntary return programme.

There are currently more than 500 migrants at the MCR, according to the IOM. Most of the migrants are from Somalia and Ethiopia.