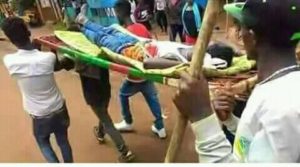 Federal police say they have arrested five officials of the Benishangul-Gumuz region in Western Ethiopia in connection with recent deadly violence in areas bordering with the Oromo region.

The officials include the regional deputy head of security and the former mayor of Assosa town.

Police said the arrested officials are accused of adding fuel to the deadly crisis in Assosa on June 24, 2018 and the ensuing conflict in areas bordering the Oromo and Benishangul regions in Western Ethiopia.

Police also said more arrests would be made on individuals who had a hand in the crisis.

Some estimate put the death toll to at least 40 since the violence began this summer in Western Ethiopia.

The violence has also resulted in the displacement of tens of thousands of people on both sides.

Head of Rural Political Sector with ODP, Addisu Arega Kitessa, wrote on his Facebook on Monday that a total of 208 people have been arrested in connection with deadly ethnic violence in areas bordering the Oromo and Benishangul Gumuz regions. Speaking to ESAT on Sunday, police commander for the Benishangul Gumuz region, Seyfedin Harun, blamed a splinter group of the Oromo Liberation Front (OLF) for the crisis in the region.