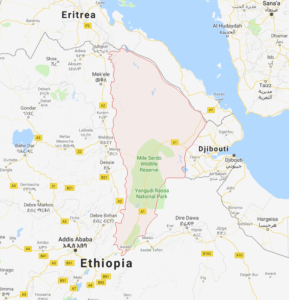 Eight people were killed in violence between the Afar and Issa communities bringing the total casualties to at least 30 in the last four days of fighting.

Information reaching ESAT show clashes have been reported today in towns along the Addis Ababa – Djibouti road. Seven people were killed in Gedamaytu while one person was killed in a village called Keroma.

The fighting between the two clans began on Monday and Afari officials in a statement accused the government of Djibouti, special forces of the Somali region, the Issa and Gurgura Liberation Front as well as TPLF of igniting the conflict.

The deadly violence was sparked on Monday when the Issa replaced the flag of the Afar region with that of the Somali region in an Afari school.

Seven people were killed and five injured today when the Afaris repulsed an attack by the Issa in a place called Gedamaytu, according to information received by ESAT.

In an interview with ESAT, Gaas Ahmed, President of the Afari Human Rights Organization blamed the Tigray People’s Liberation Front (TPLF) for working to ignite the fight between the two communities. He said there have been a campaign calling for an attack by TPLF social media trolls.

Akadir Ibrahim, an Afari human rights activist also told ESAT yesterday that there is a long history of dispute and at times clashes between the Afar and Issa clans but said the recent incident was a politically motivated plot by foreign actors and regional forces inside the country.

The Afaris today shut down the road linking Addis Ababa to Djibouti saying the Issas used the contraband trade along the route to smuggle weapons with the help of TPLF operatives.